Awhile ago I started a new blog for logistical reasons.
I may be done with all this, but just in case...
Maravilla st louis
Posted by Hollie at 11:19 PM No comments: 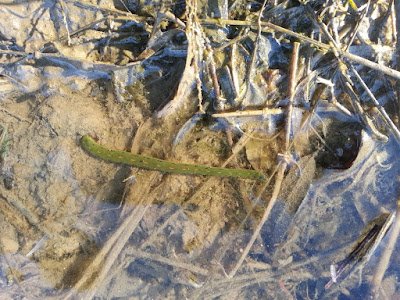 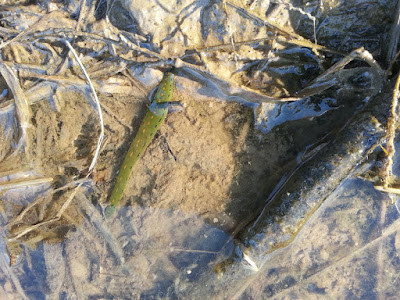 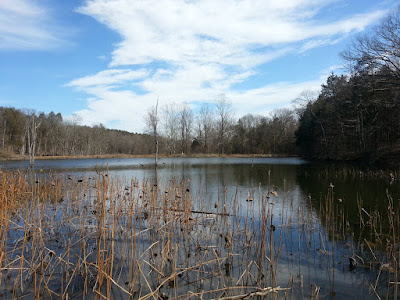 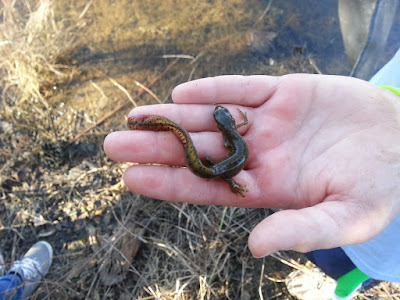 It has been a long time...
Anyway, on an unusually warm winter day, we went to Myron and Sonya Glassberg CA for a hike. We got a bit turned around and ended up at an isolated pond off the trail.
We all noticed the movement in the water at about the same time and couldn't tell what we were looking at.  We were freaking out.
There were creatures undulating through the water. Some had legs, others were green with orange spots, some were orange with brown spots.  We took one of them out of the water and it turned into a puddle of mush...until it sensed the water and in a moment found its shape again.
There were HUNDREDS of salamanders and HUNDREDS of giant leeches, 5-8 inches long.

We weren't home long, just passing through.  Just like Traveling Tom used to do.
But we did find time to pick tart apples on an ancient tree.
We played with the best cat ever.
And we also went through my Uncle Brent's corn maze in the dark. Afterward, we laid down in the damp field and watched the blood moon transform.  Pretty cool.

The bountiful harvest was used by Jasper to make a delicious apple cider.  You will never see that shade of pink in a store-bought apple cider! The rest was used for apple pie filling, which will be pulled out in the long cold winter.

I was trying to get a "nice" picture.  Jasper doesn't take those.  But i like these just as much.
Look at Tullaia and Avery trying so hard for it to be done. 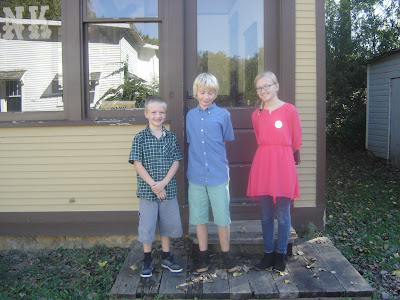 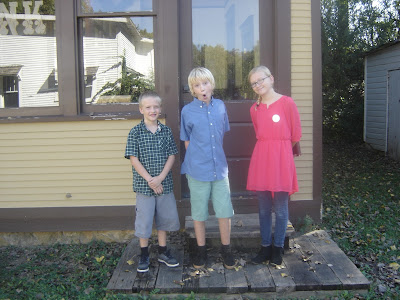 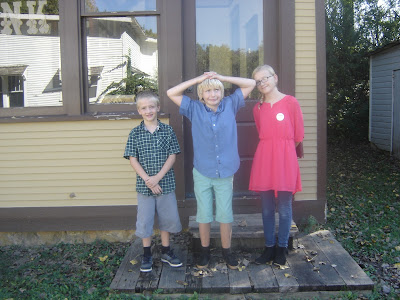 We traveled far up the Muddy Mississippi to the Twin cities for the Minnesota Shape Note Singing.
The weather was remarkable and I was surprised there wasn't snow.

If the boys go to a singing, i ask that they participate for a short time and then they can run wild outside.  They did a great job leading a song.  I asked the lovely arranging committee for a favor... The boys got out of there in a flash and made some wonderful friends.  They announced that they would like to come to all the singings with us.  Um, maybe.

The singing was in a historical village called The Landing. It was beautiful that weekend and the old buildings made me feel like i was in the "utopian" village in the movie called ...i can't ever remember the names of movies.

Our hosts were lovely and they had a cute little cottage playhouse in the back yard, which is magical to anyone who can fit inside.

The Mississippi was pretty, even while we snapped photos out the moving car.  Hard to believe that's 'Ol Muddy. 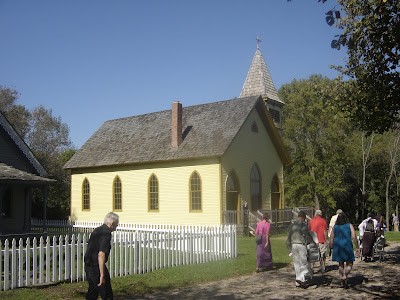 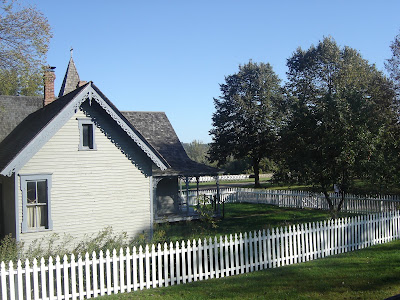 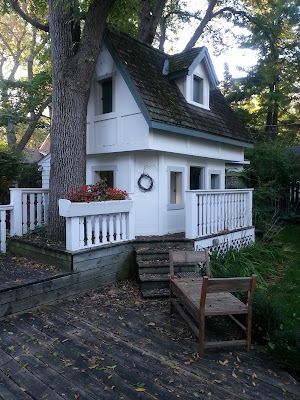 
And here is Avery standing on the waterfall in the exact same spot.  He is a little taller now.

I know we shouldn't, but we do.  We love to turn over logs and see what's underneath.


Mooner's hollow, at St Francois State Park, has always been a family favorite.  The hike is a strenuous 3-ish miles. The waterfall seems to be halfway, and depending on the current rainfall and your current size, there might even be a place to swim. 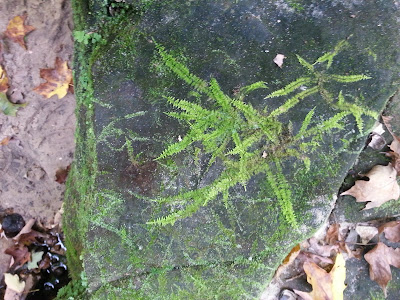 We went to Marais Temps Clair conservation area in hopes of seeing a lot of reptiles on the levees in the early morning.  We didn't get there early and it was blazing hot and humid that day, so didn't see much.
We did find a Fowler's Toad, which Tullaia identified without a guide.
Isn't he a sweetie?


The marsh is an old oxbow of the Missouri River and the streams were filled with large groups of long nosed fish.  We all thought muskie, but after reading more I don't think they live there. 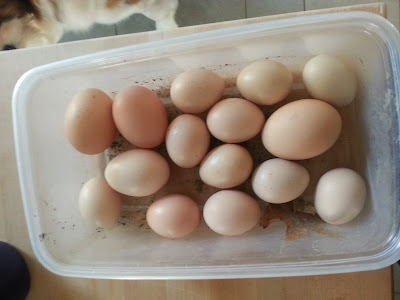 This was the egg cache discovered under the porch in a nest-like structure.
Even though they have a spacious coop, the chickens have high expectations and wait excitedly to be let out into the yard to roam.
But we are done with that, since all of these had to be tossed.  We aren't feeding them for free!

The chicks and chickens never realized their group potential.  But thankfully, we have a neighbor who intended to get chickens and took the bossiest ones.  I surely miss them, especially Bessie.  She was so social and sweet.  But i don't miss all of the 'pecking to the skull' bit.

Pidgie survived and all of her feathers have grown back. It amazes me what a body can recover from. 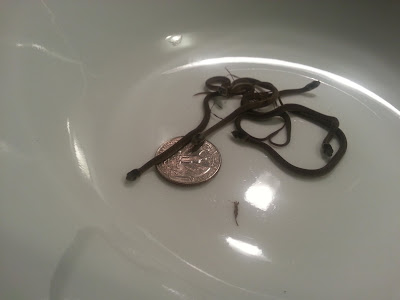 Midland brown snakes give birth to live snakes and i wish we had witnessed it.  There were 7 in all.

Jasper found "him" in the yard this spring and wanted it to be a boy, but guessed it was a "her".  He also guessed it to be pregnant, due to the plumpest belly you'd ever see on a little snake.
Good job sleuthing Jasper!

We let them go in the hugelkultur bed and they are hopefully eating all the slugs.


I thought a lot about fear while i was at Windridge.
Oftentimes, it stems from the unknown.  But sometimes the things we are most comfortable should cause us more alarm.
A co-worker and I had a conversation about camping, in which he assured me he would never go camping.  Or go into the woods, for it was too scary.
This man lives in one of the most dangerous neighborhoods in one of the most dangerous cities.  We laughed about this peculiarity.
Recently, he was arrested for a double homicide, which occurred in the alley behind his house.

I have been coming here for years and i enjoy a camaraderie with the land.
I love to see how much a creek changes.  Our area had record rainfall in June and the creek had been washed clean of all it's gravely rock.  Instead, there was smooth, flat rock underneath and all of the rock had been pushed into tidy piles.
The extra rain made the meadows lush. There were pools of water throughout the creek bed, a rarity in August.
I went for a 4 hour ramble, down the creek, up into the forest, through the meadow.
Headed inside around dusk to get supper.  Left again with a flashlight and walked down the creek, up into the forest, and through the meadow.
I grabbed a chair and set it up in a clearing to watch the stars come out.
The sounds and smells were deafening.

If only you could smell the yard...i plant for the birds, butterflies and bees.  And humans.  I am lucky Tullaia got a nice camera for her birthday.  She likes to take photos of flowers too!