We're in a National Geographic Book! 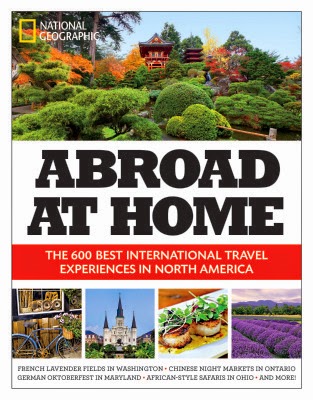 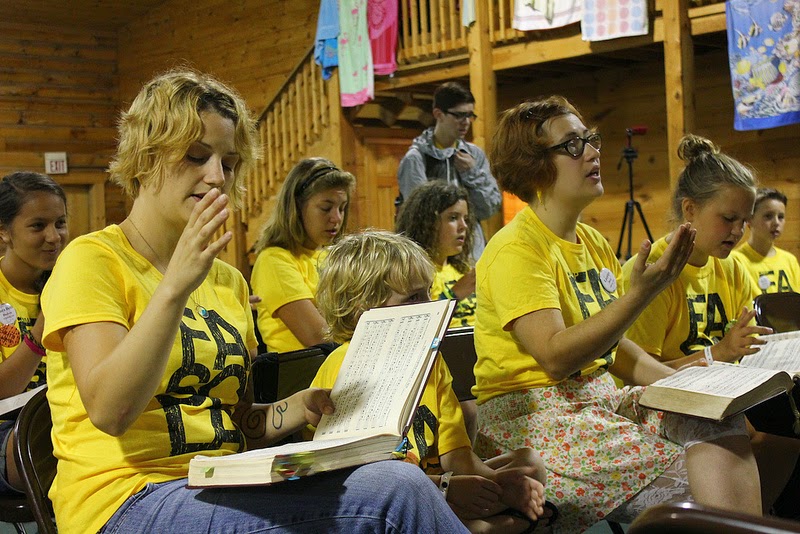 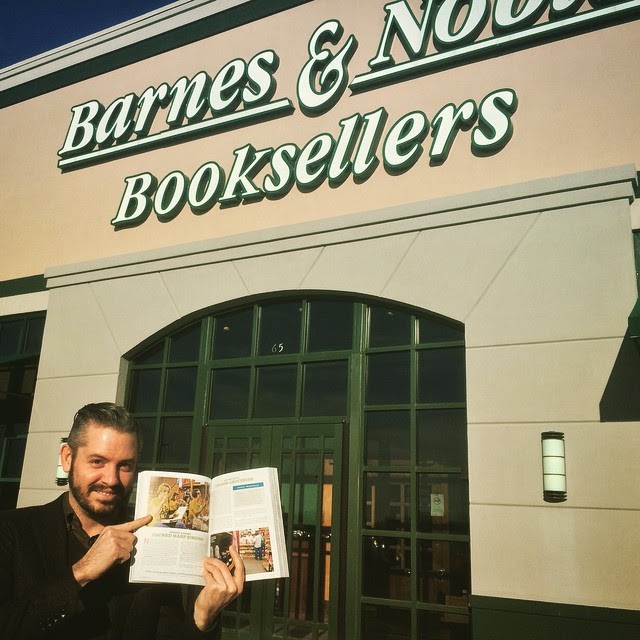 Jonathan Smith takes great photos of sacred harp singings and Avery and i happen to be in the one chosen for this book.
Here is a link to Abroad at Home:600 Best Travel Experiences in North America 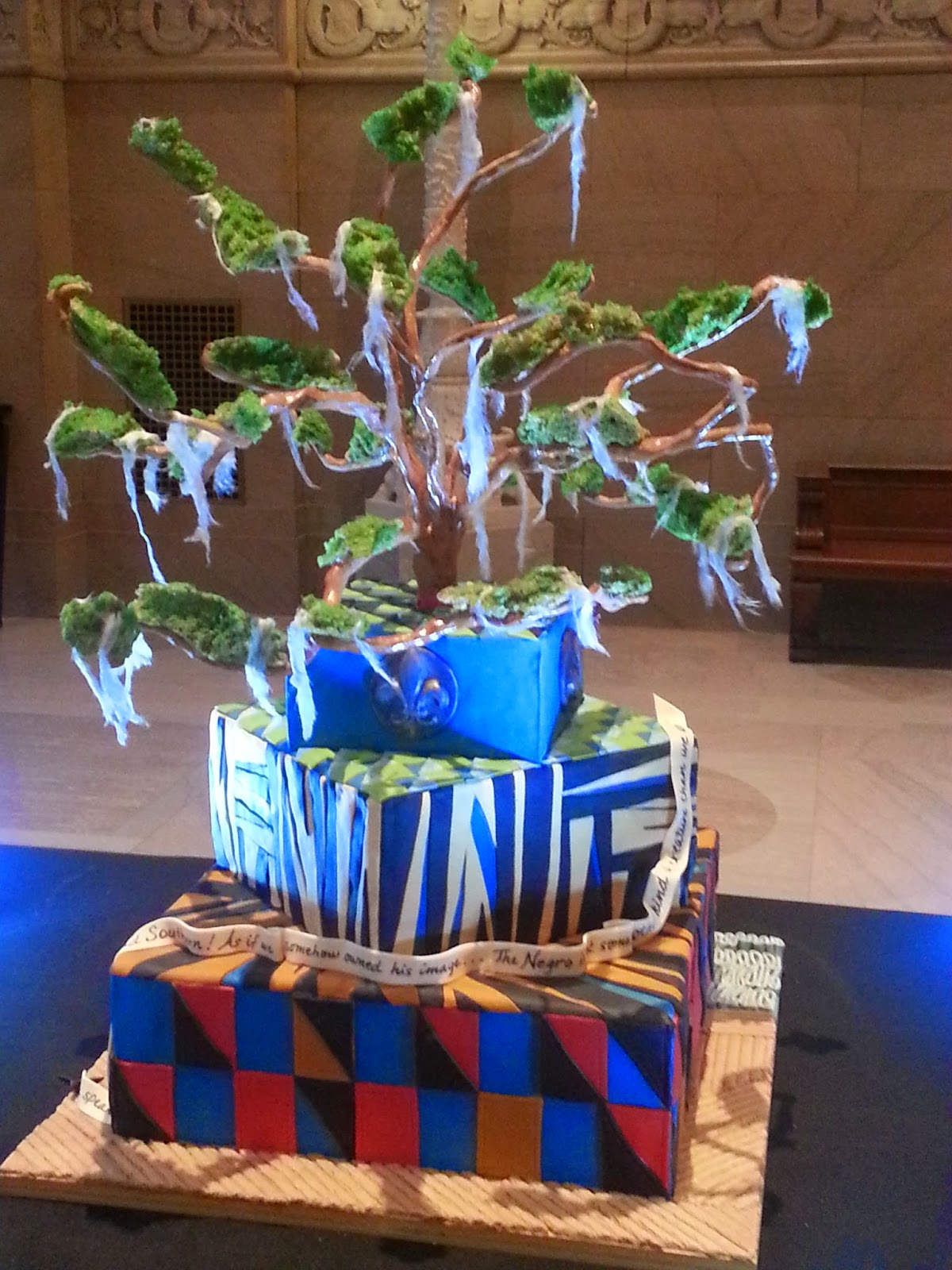 I was fortunate to help Anne and Angela and they taught me how to make inedible cakes.

We also provided small tastings of sweet cream gelato with madeira apples, cornmeal shortbread, and candied pecans.
It was so good and one guy was heard confessing that he had eaten 10 already.

What do you do with a giant inedible cake?  I don't know, but i wasn't willing to put it in the dumpster.  I thought it would be fun to have it as a centerpiece on the kitchen table.  Sort of like the doily and decorative bowl my mom has.

After Erin and Daniel's wedding(of which i don't have any photos? i will obtain some ...), we made a stop to Maramec Spring.  I don't know why this place is spelled differently than the river's name.


In 1825, a group of Shawnee Indians traveled to Washington to meet the "Great White Father".  On their way there, they camped on Ohio land owned by Thomas James.  They interested him with their stories of large trees, brightly hued earth to paint the markings on their faces, swift waters.
On their journey home, they invited him to journey West.  This led him to construct the Maramec Iron works in 1826, which operated until 1876.
Posted by Hollie at 9:38 PM No comments: 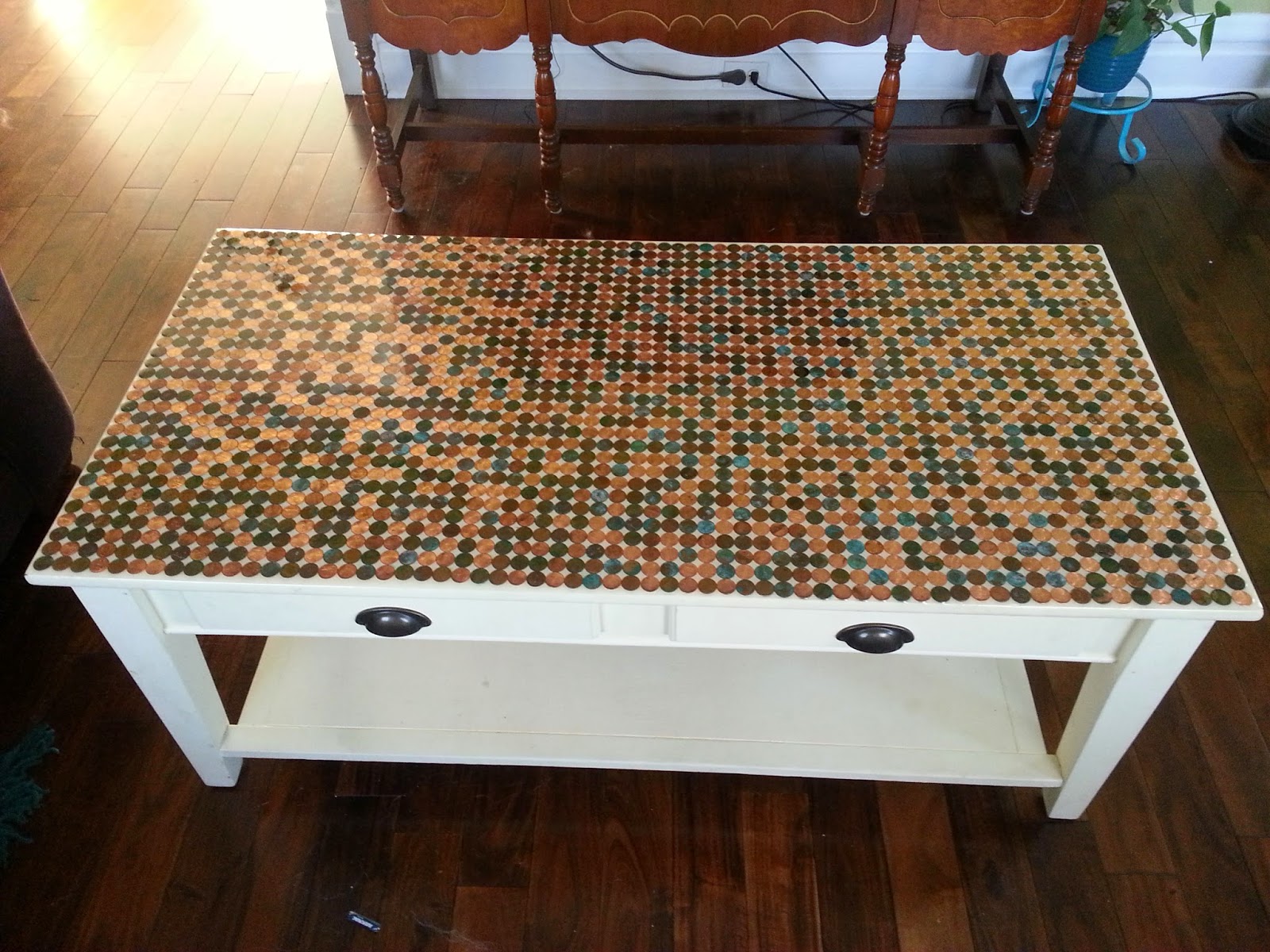 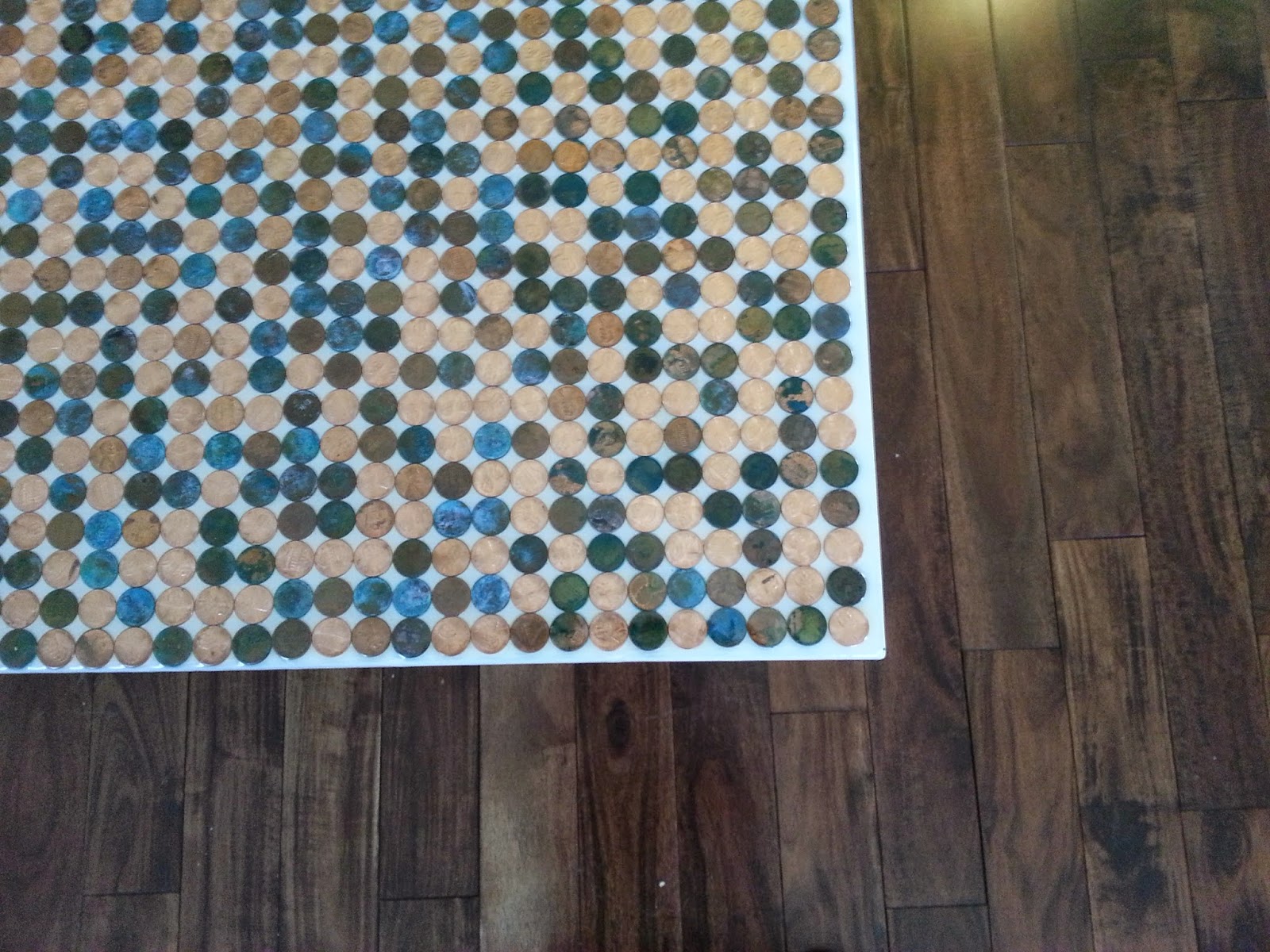 I got this coffee table for free, but it was in need of refinishing.  I painted it with chalk paint (leftover paint, water and plaster of paris) and decided to try out the penny mosaic.  We had a lot of pennies in the family jar.
It took a few more than anticipated, $18.00 in all.
I aged some of the pennies in a vinegar/salt mixture to obtain a beautiful turquoise patina.
Once the pennies were set, Justin helped me pour a resin finish, which required a bit of blowing to get the air bubbles out.  There is a reddish beard whisker embedded in the top as well as a few dog hairs. Memories...
I learned a few things.  One was that after 1982, the penny was made of copper-plated zinc.  Which must explain the funky outcome of many pennies.  They eroded from the vinegar instead of changing colors.  I think that is also why some of my lines are uneven.  The pennies are not the same size, due to the wearing away.

We take the long way home

Over the course of rehabbing this house, i have taken the long way home every time we go out of town during disastrous projects.  Even in the cold autumn rain we detoured to a place i have been wanting to see.  The rain stopped, the sun came out and we didn't want to leave.

Of course, all of this happened a long time ago. I am still a touch behind.  The kids think it's funny when i say things like that...a touch.

Here is a bit of information from Mo State Parks
Dillard Mill is the second mill structure at this site. Wisdom's Mill, the first mill built here, was constructed in the 1850s. A rock wall along the Huzzah Creek was blasted open allowing the increased water flow to the mill needed for its operation. As a result, Huzzah Creek changed its channel.
Joseph Dillard Cottrell and his brother, James, later owned Wisdom's Mill from 1881 to 1889 - years that brought many changes to the area. During the Cottrells' ownership of the mill, the small community grew with the establishment of a post office in 1887. It was also during this time that the community was named Dillard after Joseph Dillard Cottrell.
In 1889, the Cottrells sold the mill to Andrew Jackson Mincher. The mill burned in 1895 during Mincher's ownership. Emil Mischke, an emigrant from present day Poland, purchased the mill property in 1900 and began construction of the present mill four years later.
Using some of the hand-hewn timbers salvaged from Wisdom's Mill, Mischke built a 30-foot x 40-foot structure. Following plans developed by the Cornelius Mill Furnishing Co. of St. Louis for the interior of his mill, he installed steel roller mills instead of the more common buhr stones for grinding the wheat into flour. Another innovation he introduced was a turbine to power the mill. The new, modernized mill was completed in 1908.
Mischke's sister, Mary, became a partner in the milling enterprise in February 1907, and they both worked hard to make the mill a success. Farmers from the surrounding hills and valleys came to have their grain ground at the mill. In 1917, Mary sold her portion of the mill back to her brother, and he remained the sole proprietor of the mill for several years.
A decade later, the 66-year-old Mischke decided to send for a mail-order bride. His new bride, however, found it difficult to adjust to life in the rugged Ozarks and after only a few years persuaded Mischke to sell the mill and move to California.
Lester Klemme became the new mill owner in 1930. In addition to milling livestock feed and flour, he decided to take advantage of the rustic Ozark landscape by starting Klemme's Old Mill Lodge. A guest could spend the night in one of the cabins Klemme built, fish or swim in the mill pond, and eat at the Klemme table for only $7 a day.
Klemme's age and a shift in the local economy from farming to mining brought about the shutdown of the mill in 1956. He continued to operate the lodge until the 1960s. In 1974, the L-A-D Foundation of St. Louis, a non-profit organization, bought the property. In 1975, the foundation leased the mill and surrounding property to the Missouri Department of Natural Resources to operate as a state historic site. Also on the property is a building that once housed a general store owned by Adam Wilhite. 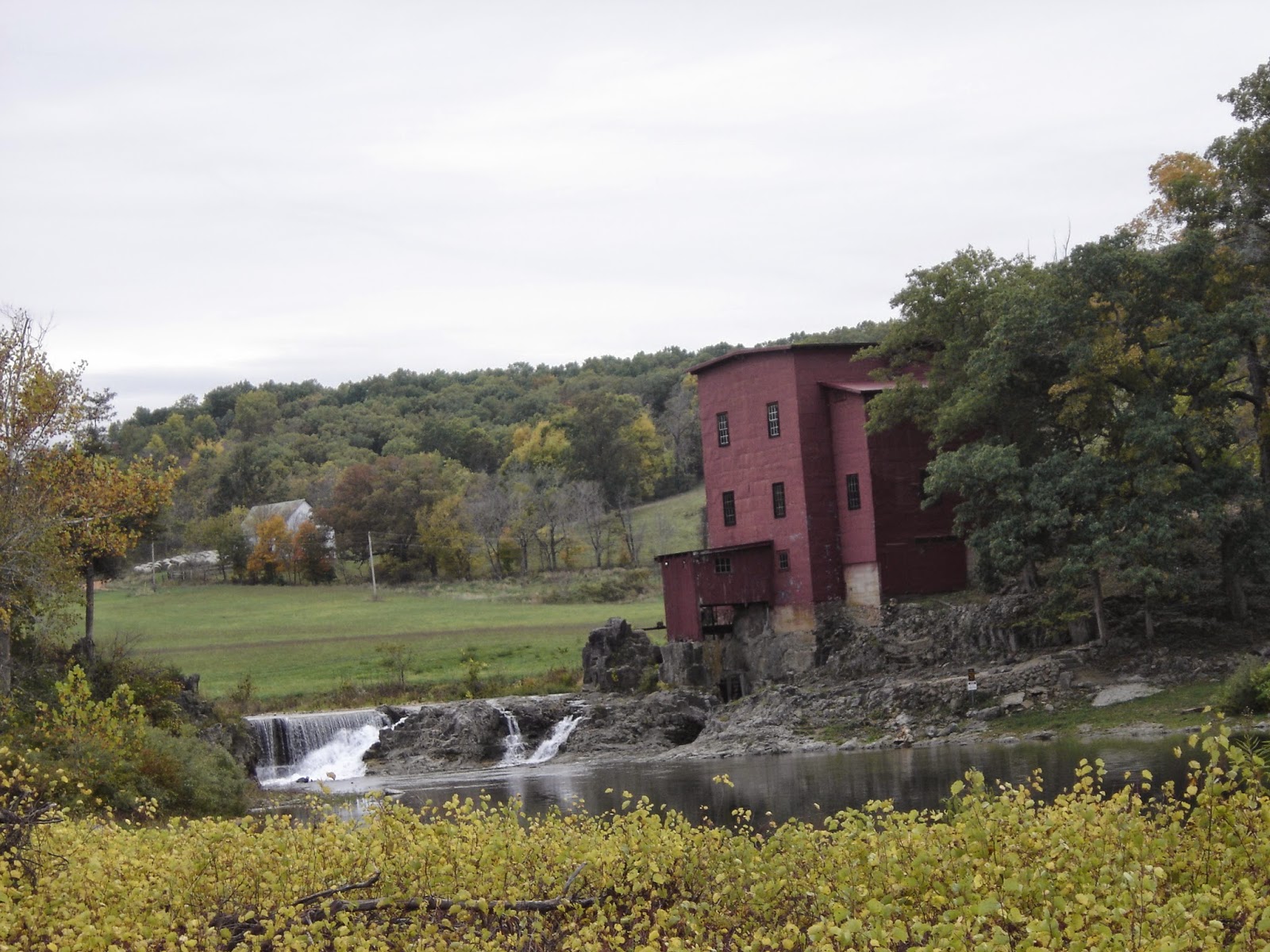 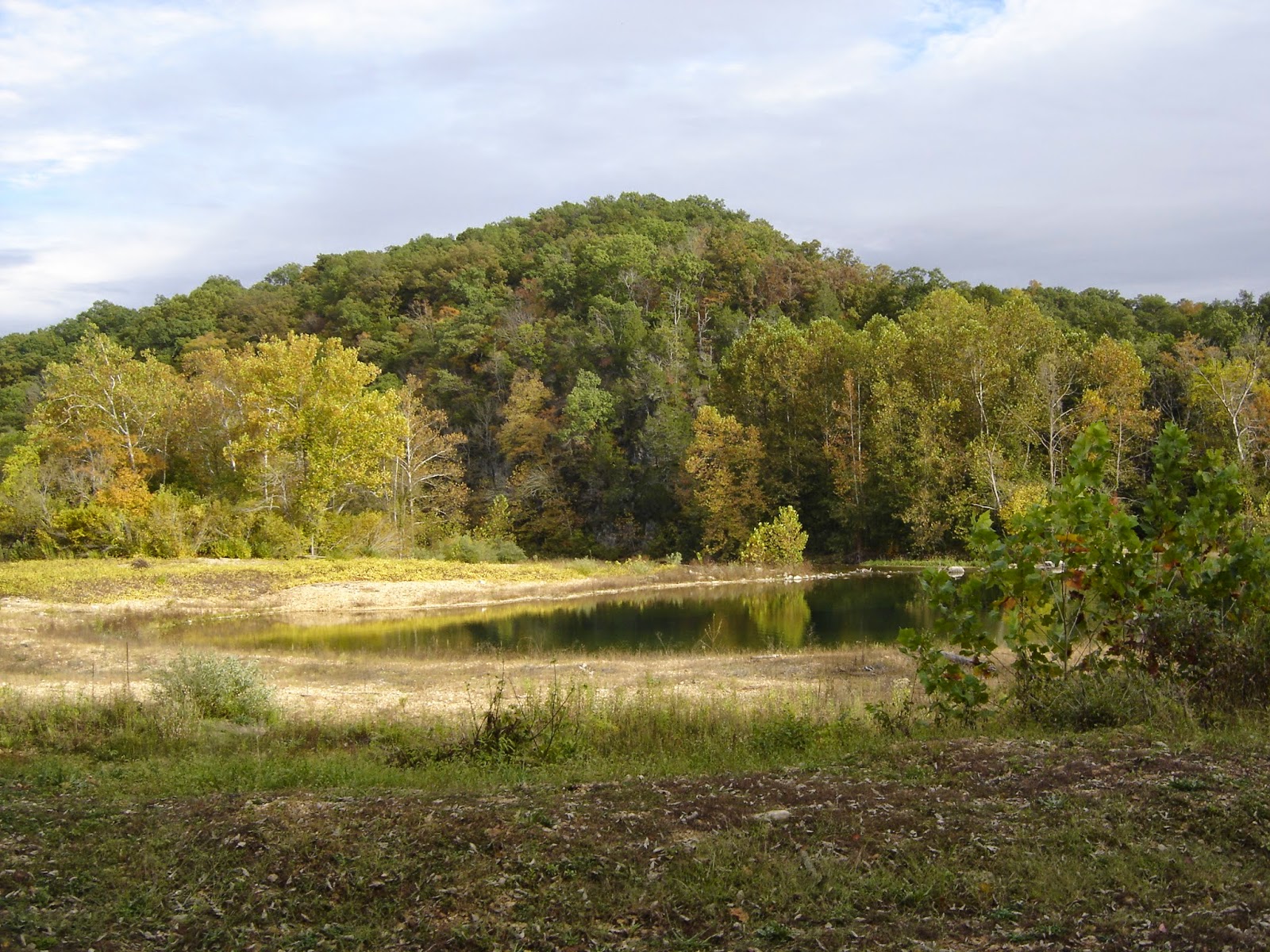 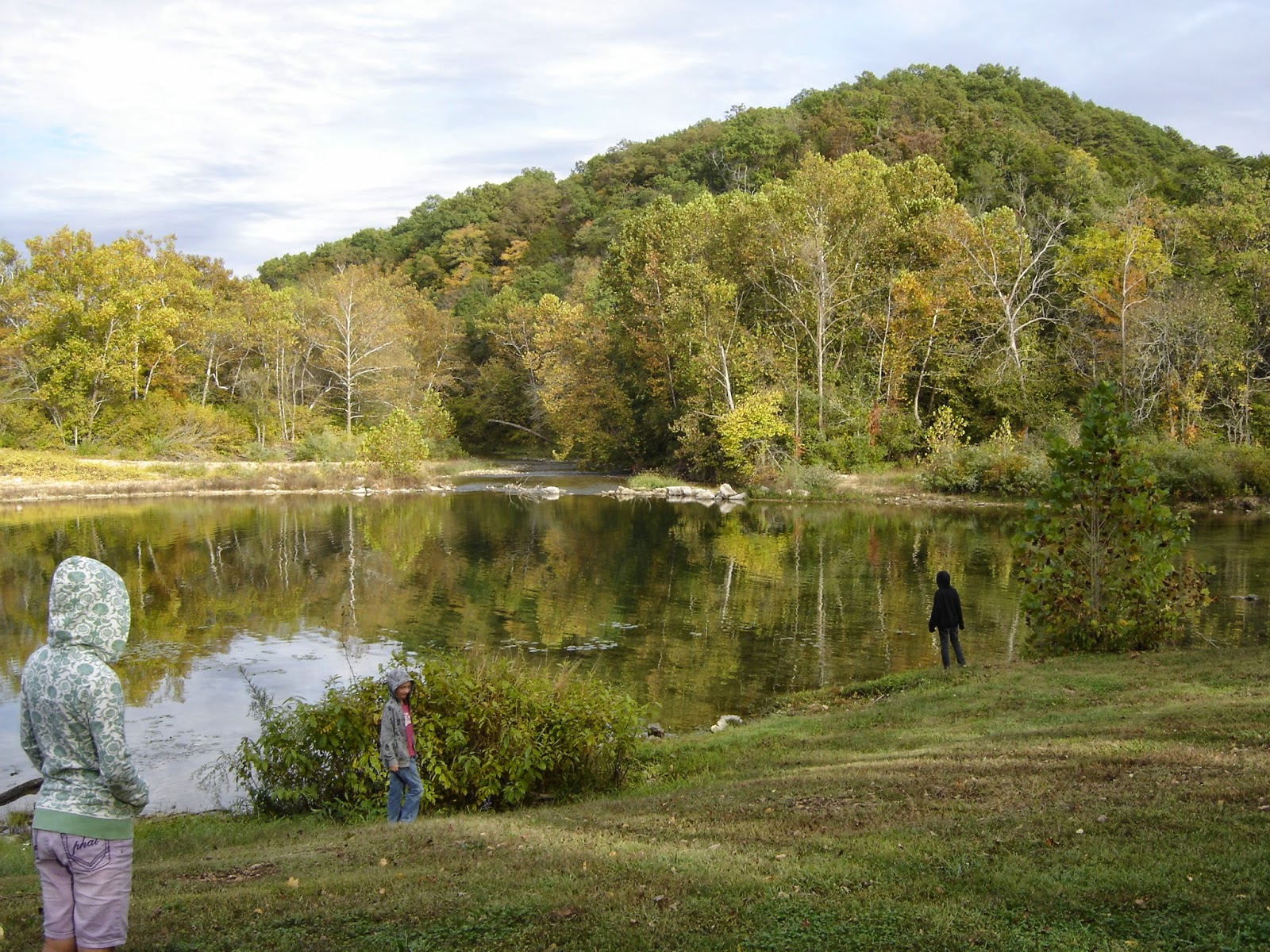 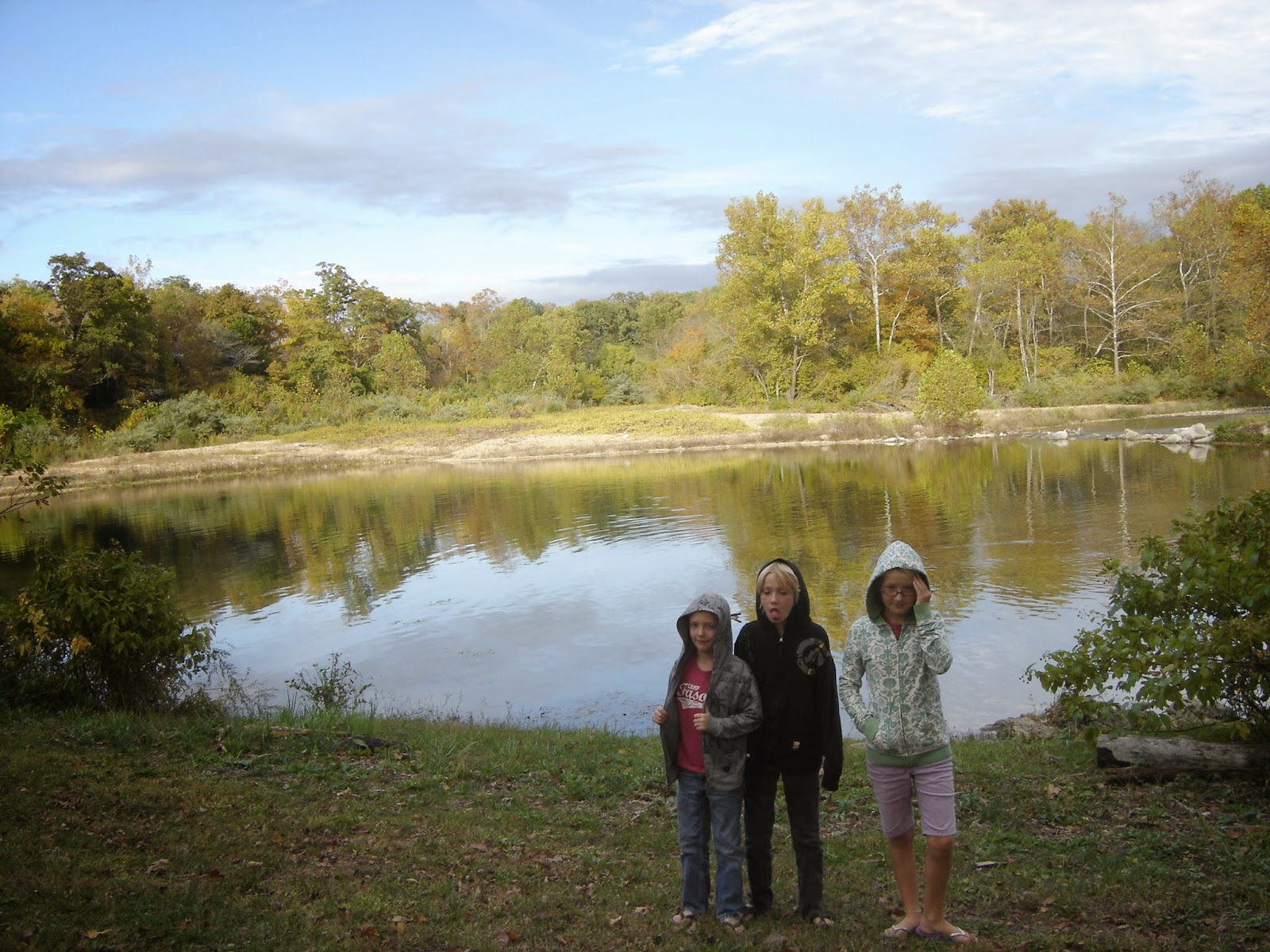 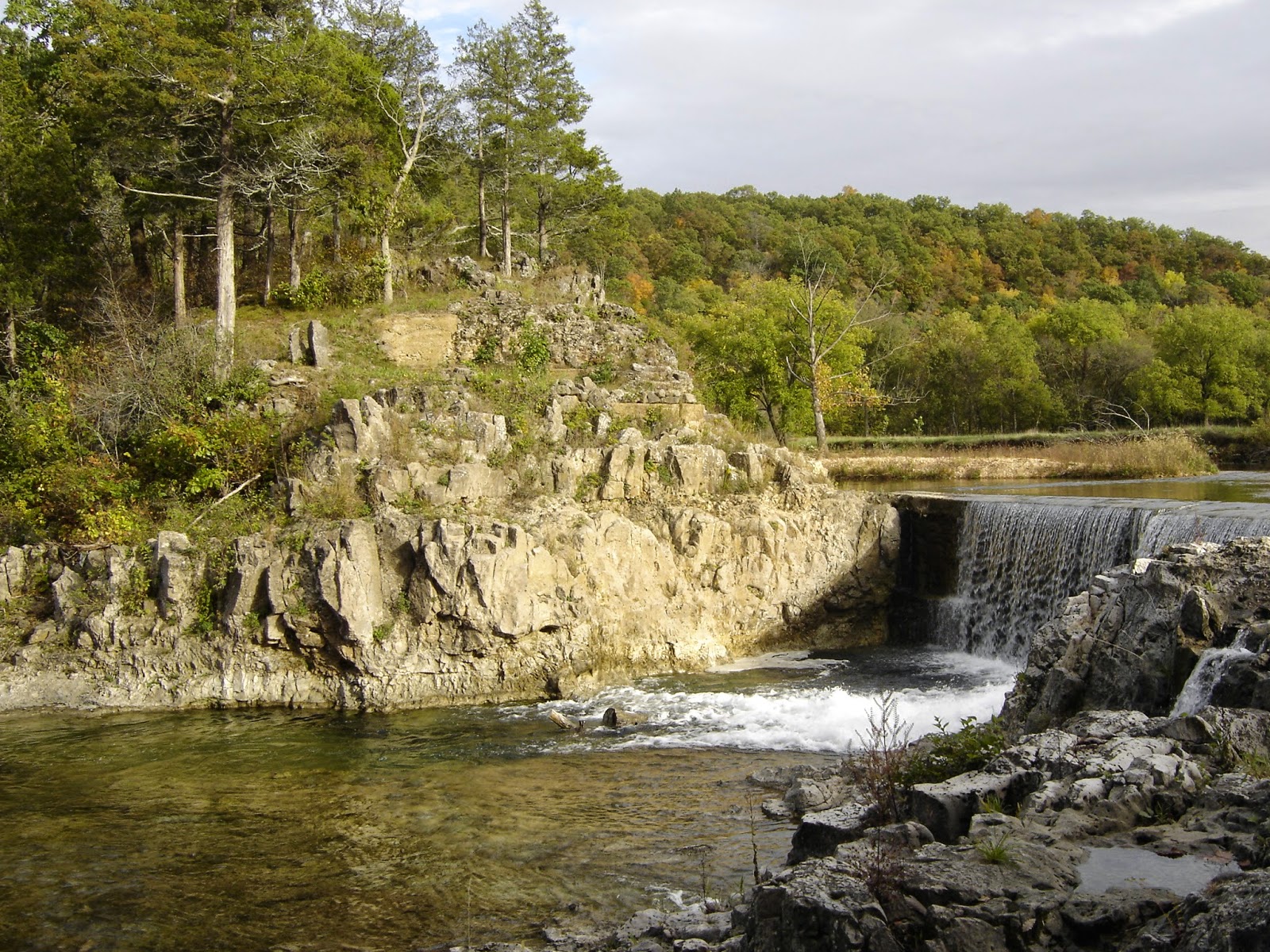 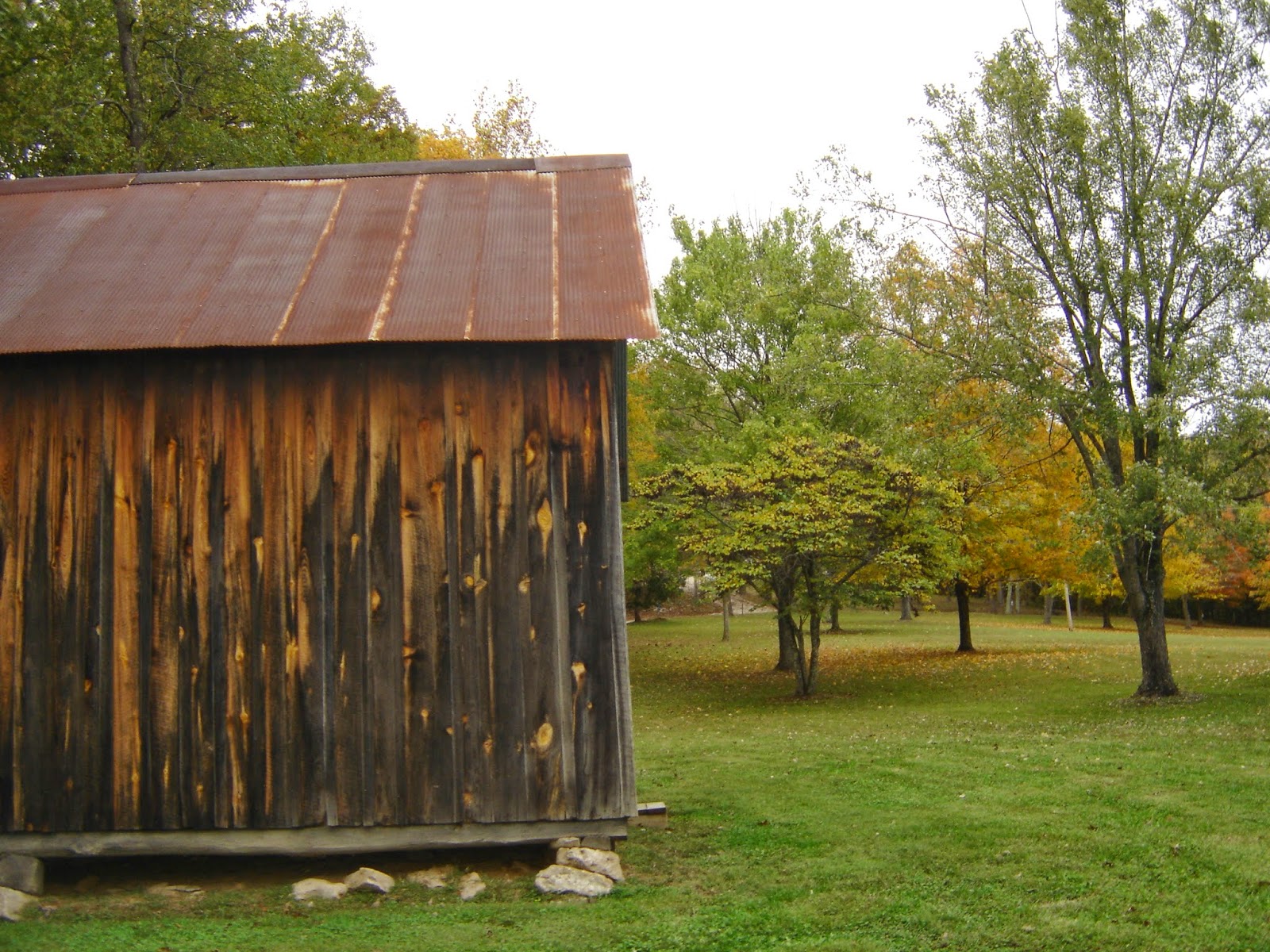 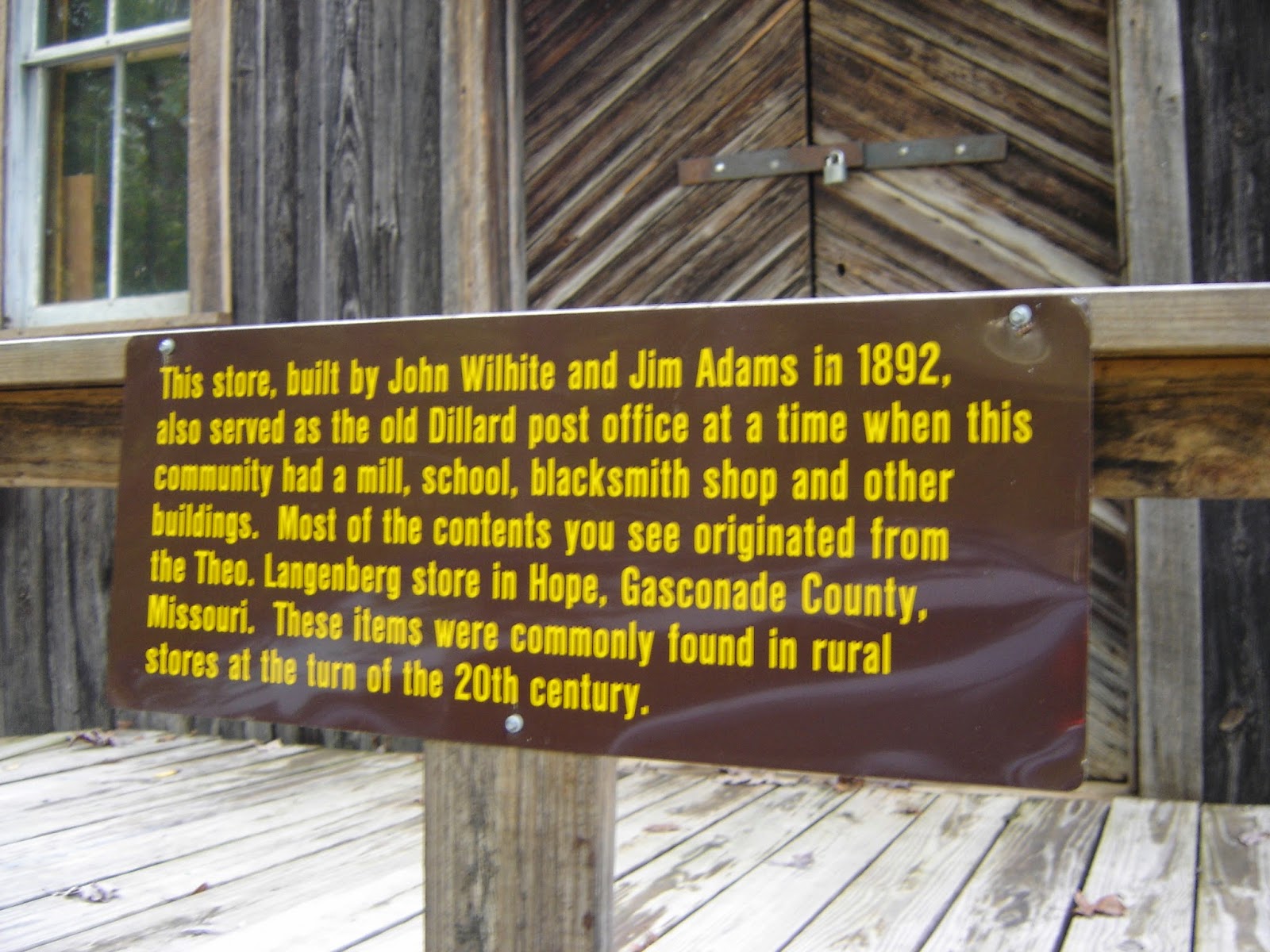