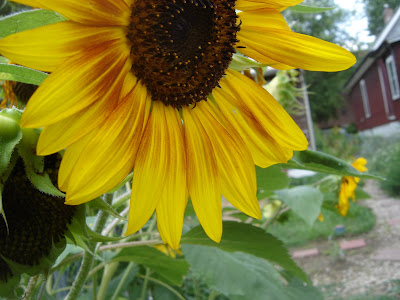 Sunflowers are their favorite item to eat, although they munch on the zinnias as well. And i don't mind that they ravage them to bits. It is nice to have the pretty little birds around.
Posted by Hollie at 9:49 PM No comments: 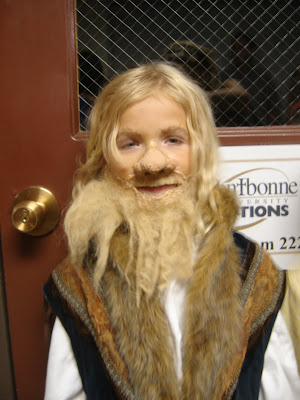 The play was super and we are proud of Bifur. One more weekend to go!
Posted by Hollie at 9:37 PM 1 comment: 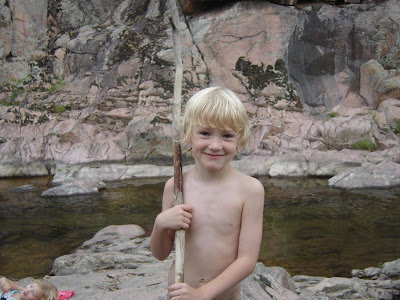 We have ventured here a few times lately. Just about the same distance away as the more popular Johnson Shut-ins, but less busy. Too pleasantly preoccupied to take many pictures. This is the only one i got.

"The Castor River Shut-Ins is Missouri’s only known pink granite shut-ins. This picturesque pinkish granite is from the Breadtray formation, an igneous rock formation that is 1.5 billion years old. Most of the exposed igneous rocks of the St. Francois Mountains region are rhyolite rather than granite. Igneous rocks are formed from volcanic activity. Granite is a coarse-grained igneous rock formed from magma that cooled underground and was later exposed. By contrast, rhyolite is formed when magma is cooled above ground. Shut-ins occur where a broader stream is “shut in” to a narrow canyon-like valley. Shut-ins typically occur in Missouri where streams flow through softer sedimentary bedrock materials such as dolomite or sandstone and then encounter the more resistant igneous rock.

The rocky slopes and outcrops above the Castor River support igneous glade natural communities. These areas have widely scattered shortleaf pine, blackjack oak and farkleberry in between which are found large areas of mosses and lichens. Where some soil has developed in cracks and fissures in the rock you can find lance-leaf coreopsis, fame flower, prickly pear cactus, pine-weed, and little bluestem.

Castor River flows through the area with pools, riffles, the shut-in, and small waterfalls. Downstream of the shut-ins you might spot colorful small fishes such as the Ozark minnow, bleeding shiner, rainbow darter, and striped fantail darter. Anglers might get lucky and catch a smallmouth bass, shadow bass (goggle-eye), or longear sunfish. The stream itself can be a welcome relief on a hot summer day and makes for good wading. Downstream of the natural area is the site of the Hahn’s gristmill which operated in the 1870s."
We tried to hike to the old site of the gristmill, but the trail is no longer maintained, and we didn't locate it. Maybe next time. A wonderful day trip from St. Louis.
Posted by Hollie at 8:29 PM No comments:

Tullaia has the privilege of participating in Clayton Community Theatre's production of The Hobbit. She is Bifur, a dwarf. She will be in prosthetic facial features and beard so you can find her onstage by her blue, velvet cape.
Here is the website for anyone interested in ordering tickets. The performance will be the last 2 weekends in July.
http://www.placeseveryone.org/
After months of hard work and late-night practices, we are so excited to see the finished product!
Posted by Hollie at 10:49 AM No comments: