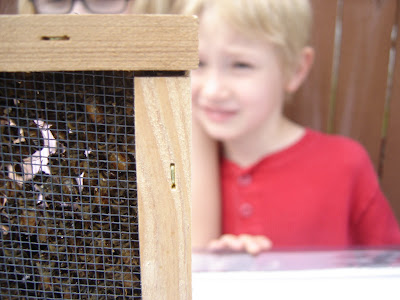 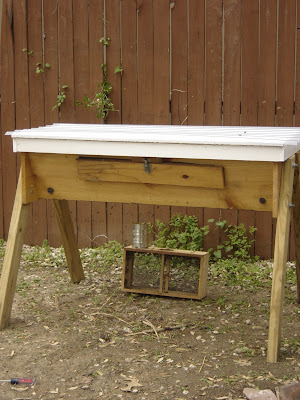 Justin drove 4 hours with 10,000 bees in the car this weekend. They bee-haved themselves.
He managed to get them in the hive without getting stung.
And he didn't get stung after he had to take the queen out the next day and take the tab off of the case she is in. And also when he got back in the following night to fix something. And then again later that night to pick up the queen covered in bees after she dropped to the bottom of the hive and put her back up top. No one has been stung and i am surprised.
Learning curve and the bees have been gracious with all our mistakes.
Posted by Hollie at 10:17 PM No comments: 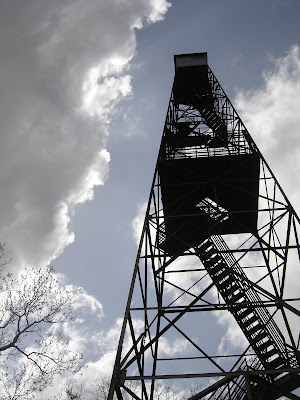 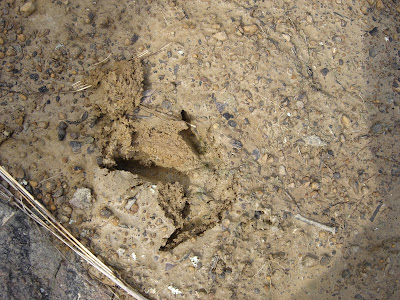 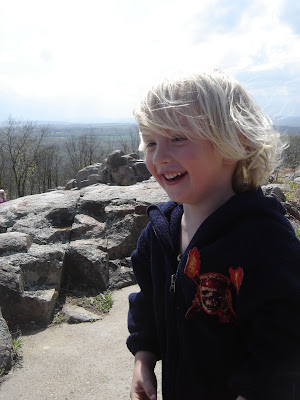 Jasper And A Friend 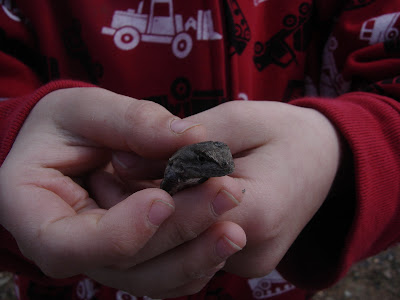 Not far from Pickle Springs is an old fire watch tower. It offers excellent views of the St. Francois Mountains. The area below the tower is a glade and lizards are abundant. Broken glass is also plentiful, hinting at this area's life after dark. I cannot imagine the tower being a fun place to go drinking, but teenagers do a lot of dumb things.
Speaking of the tower, Justin and I both had a fair amount of anxiety up there. Not sure if it was the high winds blowing in with the storm or the patchwork of chain link, but it felt very unsafe. Nevertheless, we were glad to see the expansive view. And glad to get down again.
Posted by Hollie at 9:58 PM No comments: 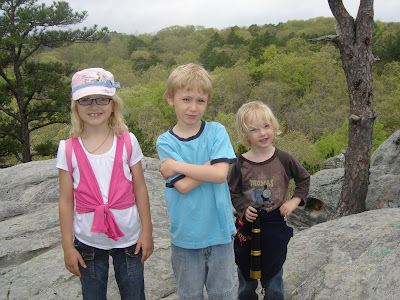 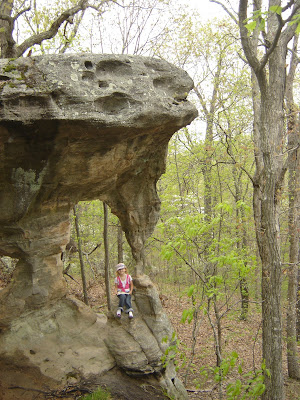 Pickle Spring (A tiny gurgle underneath the waterfall) 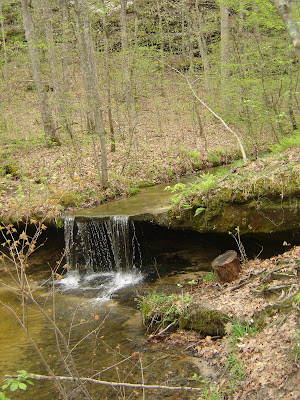 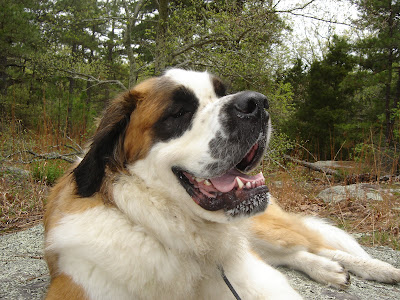 Pickle Springs is only 4 miles down the road from Hawn State Park, one of our favorite campgrounds. And that is only an hour and 15 minutes from home. It is a marvelous day trip!
It is a 2 mile loop of fascinating geological features. A 16 page trail guide highlights the rock formations, canyons, waterfalls, caves, arches, bluffs, and hoodoos.
I am envious of William Pickles, the man that settled this land in 1848. Although it is said he was murdered about Sam Hidlebrand and a bunch of renegades during the Civil War. (Justin's former boss' Great Grandfather) Either way, he had a sweet place to live and we are fortunate enough to enjoy it.
Posted by Hollie at 9:33 PM No comments: 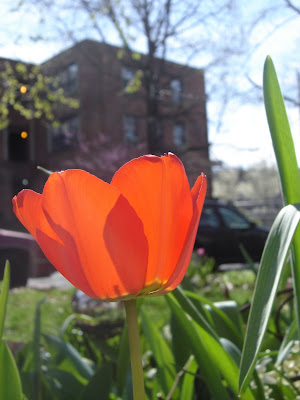 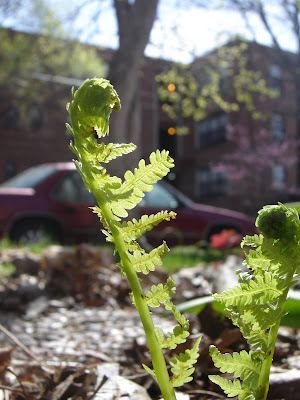 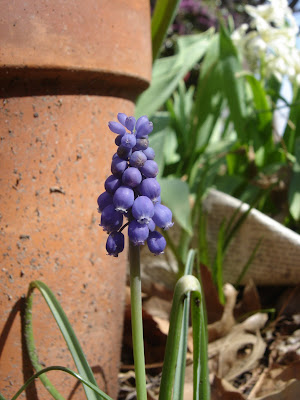 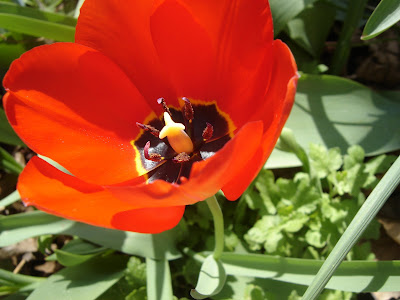 I am amazed at the resilience of all things. These flowers had buds when we received 5 or so inches of snow. They are virtually unscathed.
It is Hope to last for a year to come.
Posted by Hollie at 12:18 PM No comments:

My Mom sent this Eagle web cam link to me.
You can watch the family live or see past videos of various things like the eggs hatching.
http://www.ustream.tv/decoraheagles#utm_campaigne=synclickback&source=http://www.raptorresource.org/falcon_cams/decorah_eagle_xcel.html&medium=3064708
Thanks Mom! Very neat to see...
Posted by Hollie at 9:37 AM No comments: 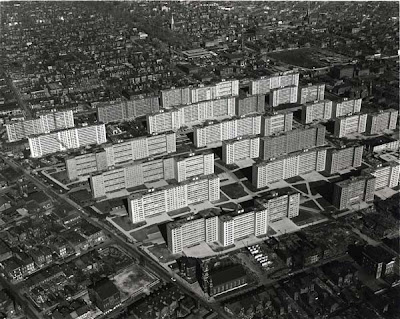 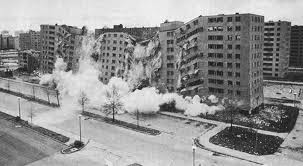 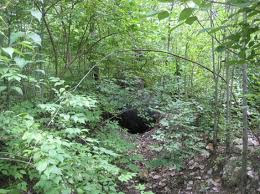 I have always been fascinated by this story. Last night we were talking about it and then today it was talked about on St Louis On The Air. Chad Freidrichs, director of Pruitt-Igoe Myth, was on to share his insight. His movie is playing at the History Museum on Saturday at 2. I would love to go but it's $10. It sounds really good. He presents a personal side to the story rather than just the failure of it all.
Pruitt-Igoe was a large federal public housing project completed in 1956. The 33 high-rise buildings were demolished in 1972. It is now a huge forest encircled with tall barbed wire. If i was brave I would love to venture in and take a nature walk.
Minoru Yamasaki was the architect who designed the complex as well as the World Trade Center Towers. Both of these projects have blown up for different reasons. I find that interesting.
The Federal Government helped build it, but did not maintain it. This led to all sorts of problems and decay was rapid.
I don't know if Paul McKee has his futuristic hands on this property, but i would love love love to see it turned into a fabulous park. Or an urban farm. Something green. Nothing else would make sense. It would make that part of the city desirable in a way it isn't right now. No sort of strip mall or casino can do that.
If i had time and money, it would be something i worked toward. But i have neither, so i am hoping that someone else takes it on. (Gateway Greening?) I would help.
Posted by Hollie at 8:55 PM No comments: