This is my favorite shape note song.  More on shape note singing later...
Posted by Hollie at 2:10 PM No comments:

We don't have any "after" pictures of the house yet.  But that doesn't mean there hasn't been progress.
We have made many improvements since we first moved in, but we didn't expect to rehab it while living here, so it feels like it is moving too slowly.  I need to write it down so i can remain hopeful and be thankful for the progress we are making.
Now we have:
Plumbing (copper was stolen)
Roof on moldy sun room
Upstairs bathroom leak repaired
Glass block put in place of downstairs bath plywood window
Microwave
Paint on some walls
Fridge
Blinds on the first floor
Hot water heater
Kitchen faucet
Sun room gutted
Sidewalk taken out on west side/french drain put in
Plaster out of basement
Foundation tuck pointed
Wallpaper off third floor bedroom
Less spiders?
Functioning sewer
Washer and Dryer!
Locking back door
Less poison ivy
Floors refinished

Many of these things/jobs were taken care of by loving family and friends.  Even some (fridge) by people we don't know.  We are thankful for all the help we have been given.

It isn't going as planned.  But nothing ever does. 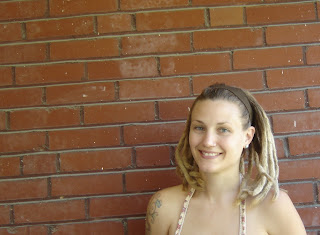 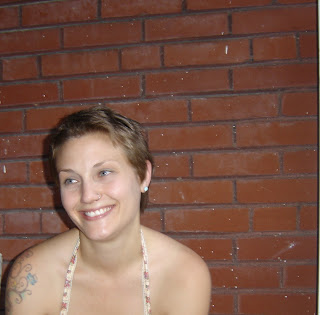 We don't have air conditioning or a shower and with this terrible heat, i couldn't take it anymore.  7 years is a long time, so i stood holding the scissors and giggled nervously.  And then i just started cutting.
Posted by Hollie at 8:57 AM 4 comments:

Justin was bit by a dog last month. But it was on a Friday night...bummer.

The St. Louis City website says to call 911 if a dog bites. So he did, but they denied having anything to do with it. So he called our local police at the Seventh District. They also said they couldn't help him, but he should try animal control on Monday.

A few months ago, the kids and I are on a walk. Tullaia has Stella (an Akita mix) and i have Judy (St. Bernard). We cross to the other side of the street when we see a dog wandering around. We continue walking, but i am alarmed when i see the kids ahead with more dogs in the lot next to them. They are growling and barking. The hair is raised up on their backs. One is a big black Akita. Another is mangy and 3 legged. And there is a nursing/pregnant black dog. (In addition to the black one across the street and a few smallish non-threatening ones.) I wonder if they are related?

I know their descriptions well because every week i place a complaint with the CSB(Citizen Service Bureau), St Louis' place for communication. And every week, my service request is marked as "resolved". Nothing is being resolved. The dogs are still there and they are easy to find.  In fact, the nursing/pregnant dog was indeed pregnant and this week there were brand new puppies lying next to her.

The dog that bit him was not part of this pack. But it is part of the same problem.

Dogs need to be posing a threat for action to be taken. And growling and baring teeth doesn't count. "Threat" means an attack, and i know this now after speaking with Jill from Animal Control.
If an animal bites, animal control will come out and deal with it(not after hours).  If not, the complaint is forwarded to Stray Rescue, a non-profit staffed with volunteers.