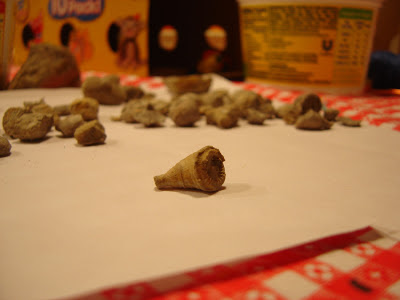 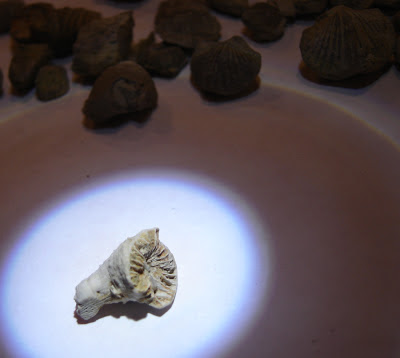 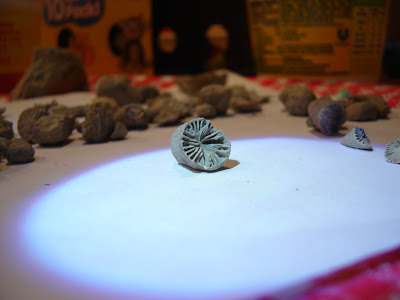 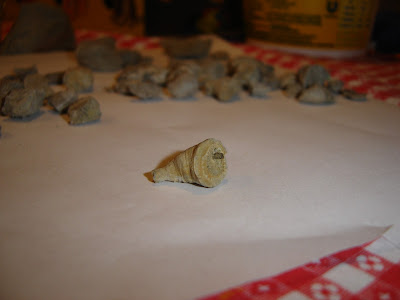 Horn corals, known as Rugosa or Tetracoralla, are an extinct order of coral that were abundant during the Middle Ordovician to Late Permian stages. They were known as horn corals because of a unique horn-shaped chamber with a wrinkled wall.
Rugose corals have a skeleton made up of calcite that is often fossilized. Like modern corals, rugose corals were benthic, living on the sea floor or in a reef-structure. Although there is no proof, it is believed these Paleozoic corals possessed stinging cells to capture prey. They also had tentacles to help them catch prey. Technically these corals were carnivores, but prey-size was so small that they are often referred to as micro-carnivores.

Here are some of the crinoids that we found this week.  Crinoids are pretty cool and we find them everywhere.  I want to make a necklace out of the small segments. 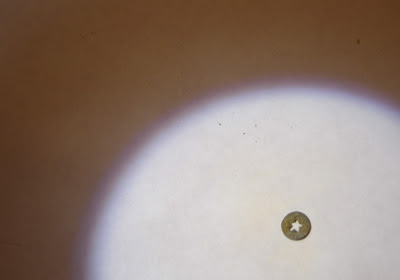 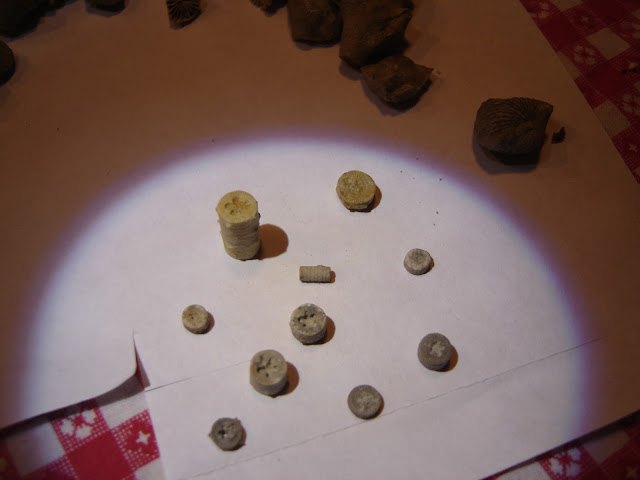 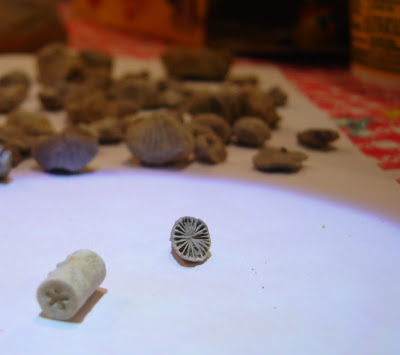 Crinoids are unusually beautiful and graceful members of the phylum Echinodermata. They are also some of the oldest fossils on the planet.

This is the phylum that brings you starfish, sea urchins, and sand dollars. The crinoids are a breed apart however, they resemble an underwater flower. Some even have parts that look and act like roots anchoring them to the ocean floor. They are commonly called sea lilies. Their graceful stalks can be meters long.

These echinoderms were at their height during the Paleozoic era. They could be found all over the world, creating forests on the floor of the shallow seas of this time period. There were so many in places, that thick limestone beds were formed almost entirely from their body parts piled on top of each other.

Crinoids of today tend toward deeper waters. You won’t see them on your next snorkeling adventure. The stalked varieties are usually found in water over 200 meters deep, though some can be found 100 meters deep. Crinoids fossilize readily and so there is an abundance of them to be found, mostly stalk fragments. There are 2 reasons for this. The ocean floor is a good environment for fossilization to occur. Their skeletons are made of calcareous plates. This is a hard rock like material.

http://www.fossils-facts-and-finds.com
Posted by Hollie at 10:23 PM No comments:

We went fossil hunting at Russell Wildlife while visiting Iowa.  We found lots of different fossils.  Snow covered most of the ground, but we found exposed soil  near the edge of the pond.

Here are some of  the brachiopods we found. 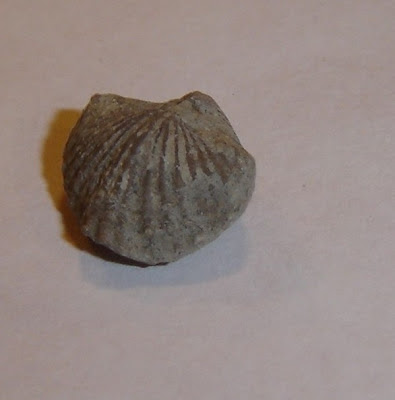 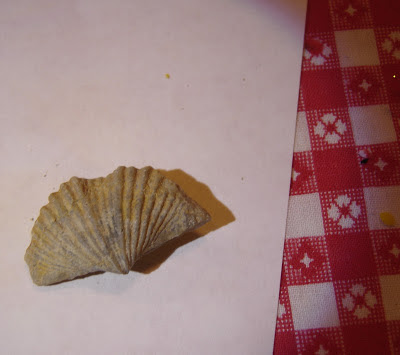 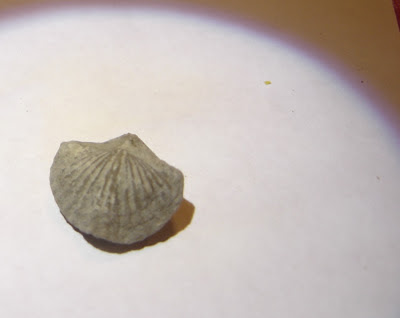 Brachiopods are benthic (bottom dwelling), marine (ocean),bivalves (having two shells). They are considered living fossils, with 3 orders present in today’s oceans. They are rare today but during the Paleozoic Era they dominated the sea floors.
Though they appear to be similar to clams or oysters they are not related. They are not even mollusks. They belong to the phylum Lophophorata and are related to bryozoans.

One characteristic unique to brachiopods is the pedicle. It is a long thin fleshy appendage. The pedicle is used to burrow into the sea floor as an anchor.

Some Brachiopods have a muscular pedicle. They can raise themselves up off the bottom, looking like they are standing on their heads. For others it is more like a tether.
Not all orders have a pedicle. Some lay on the sand on one side. With these the bottom shell is usually larger than the top shell. There are even some types that cement themselves to the ocean floor.

All members of this phylum are filter feeders. They feast upon microscopic organisms and bits of organic matter, which they gather from the water with a specialized organ called a lophophore.
This is a tube like structure with cilia(hair like projections). The cilia move food particles down the lophophore to the mouth.
The lophophore takes up about 2/3 of the space inside the shell, with the body of the animal occupying the remaining third.

The Valves
The two shells are each symmetrical about the midline but they are most often not equal to each other.
In contrast clams are asymmetrical about the midline with each valve or shell equal mirror images of each other.
Each valve or shell has its own name. The valve that the pedicle is attached to is called, surprisingly enough the pedicle valve. It is usually the larger of the two and has the pedicle opening.
The other valve holds the lophophore or brachia and of course is called the brachial valve. The lophophore is supported by a calcerous structure called the brachidium. This structure varies greatly in complexity from a simple loop to a double spiraled coil. The shape of the brachidium is important in determining brachiopod classification.
There is usually a central raised area on the pedicle valve called a fold with a corresponding depression on the brachial valve called the sulcus.

Geologic History
Brachiopods have a long geologic history. They have been around since the Cambrian Period. From the Ordovician Period through the Permian Period they were abundant in numbers, but the Permian extinctions reduced their numbers severely.
Several orders survived the extinction but brachiopods have never regained the abundance they enjoyed during the Paleozoic Era. However, they may be the most plentiful fossil on earth. They are used as index fossils.

Most of this information comes from Fossils-Facts-and-Finds.com

Posted by Hollie at 9:30 PM No comments: